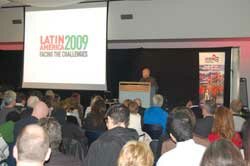 With more than 500 delegates and 50 speakers Latin America 2009 “Facing the Challenges” was by far the most successful conference ever in this now annual event at the TUC.

In the opening plenary Seumus Milne from the Guardian said “another world is not only possible, it is being created now”. The bankruptcy of neo-liberalism, the failed experiment of free markets inflicted on the continent after Pinochet’s bloody coup in Chile has now been rejected by the people. For the first time millions are no longer being excluded from basic human rights and real social progress is being made. They are reclaiming their independence, taking back their natural resources and wealth from corporate control.

As Colin Burgon MP said “they are using their power to defend the interests of the majority against the financial greed of a tiny minority”. Colin stressed there are lessons for the left across Europe and “our failure to articulate a clear and consistent programme against the free market model” is currently reflected in our poor electoral standings.

But as Miguel Angel Martínez MEP said “these victories are not irreversible, the coup in Honduras is illustrative of that fact… but it is the explosion of left ideas that is making permanent progress and the plurality of expressions of that hope, shows us that no one model will suffice. We need to embrace all these attempts and learn from them, and ensure we tell our people the truth about what is happening”.

Sam Gurney for the TUC praised Cuba’s “fantastic example of public services – a model to all of us” and both Jennie Bremner and Len McCluskey for Unite hailed the inspiration and practical, selfless solidarity that the Cuban people have given the world for the last 50 years. “They don’t demand our solidarity, they deserve it” said Jennie as she praised the use of political power to put people before profit.

Len derided the trickle down theory of neo-liberalism and praised the achievements of Venezuela and others in the region. Deploring the USA intention of creating seven military basis in Colombia he highlighted the real threat and danger this brings to the continent.

In a packed workshop on the media Richard Gott and Seamus Milne described how so many of the Latin American correspondents simply “peddle the lines fed to them by the rich elites who control the media” and ignore the social and economic dimensions of what is happening in Latin America. Because traditionally this is seen as the USA “backyard” we tend get little information although what we do get is often biased and distorted or simply Foreign Office/Pentagon briefings. With detailed examples Richard Gott highlighted this negative and lazy journalism in the coverage of Hugo Chavez and Venezuela in particular. 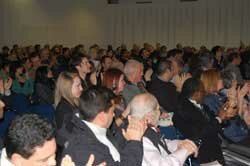 Speakers from the continent then brought home the realities of life to millions of people. After 16 years of neo liberalism the economy in Nicaragua has been devastated but things are starting to change. Although 65% of the active workforce is self employed, workers rights are being enshrined and change is starting to happen said Orlando Jose Mercado Mendoza, from the Informal sector workers union. “United we are invincible, not one step backwards” summed up his commitment and optimism for a better future.

In a moving speech Yessika Hoyos told the hall how she became an advocate for trade union rights after the murder of her father by the state. With over 2,704 trade unionists murdered, this brave woman fights to change the “culture of impunity” that exists in Colombia towards killing trade unionists. We need to do everything we can to put pressure on our government to have nothing to do with the Uribe regime.

From Cuba Carlos Alvaro talked of the changes happening as the Cuban revolution continues to evolve and stressed the need to build a better world – one based on solidarity and co-operation. He reiterated Cuba will “continue to share everything we have” and support all those countries whose people are rejecting those governments who give nothing to their people.
From Venezuela Egle Sanchez spoke of the massive social gains in the ten years since Hugo Chavez was elected and re-iterated the great threats from the right in wanting to halt the forward march of progress.

Honduras representative Iris Munguia castigated the misinformation and lies that repeated about the reasons for the coup and called on the USA not to recognise the outcome of the recent boycotted elections. Describing the illegal detentions, beatings and deaths that have occurred she praised the movement of people that has come together to fight for their rights and the return of Zelaya. “What is happening in Honduras is a precedent for the whole continent and all the governments that support the people”. She called for us to continue to lobby our government, the EU and the USA and denounce the fraudulent presidential elections.

After films and workshops on topics such as popular movements and progress in Mexico and Guatemala, gay rights, the green agenda, Education, the USA, women’s rights, to name just a few, the final plenary opened with George Galloway MP. Describing Barack Obama as “a real disappointment” he called on him to lift the illegal blockade on Cuba, immediately release the Miami Five and for David Miliband to use his last six months in his post to visit Cuba.

Ken Livingstone explained how climate change could absolutely devastate the region and set back the social progress already made. Power and water supplies could be destroyed soon in Bolivia but “it is no exaggeration to say tens of millions of deaths could occur” in the region as a whole. The need for rich western nations to contribute to mitigate the effects of climate change has to become a priority for our campaigning in the future.

Hilary Wainwright praised the new social and political movements in Latin America reiterating our solidarity must be a two way process and in doing so, we have the opportunity to learn and bring about the renewal of the global left.

Jeremy Corbyn MP praised the end of the Monroe doctrine, “the most arrogant statement there ever was” and reflected on how even when revolutions were forcibly overthrown the ideas that fed them still existed in people and families and communities. That spirit was never defeated and now collectively, the whole continent is starting to change. “The flowering of aspiration” for real human rights and social progress is happening and there must be no going back.

We need to celebrate the traditions of the Bolivarian revolution and the inspiration of Cuba and embed the social justice element into the countries new political independence. We need to strengthen all our solidarity links, oppose the military bases in Colombia and continue to challenge the media distortion and lies about what is happening.

This was an impressive day, with the hall still packed at five o’clock. As Miguel Angel Martínez said no other country in Europe could organise anything like it especially with the breadth of representation and involvement of the trade unions.

Whilst there is immense hope and lessons to learn from Latin America, Honduras could be the “first halt to 21st century socialism” as right winger Otto Reich recently applauded. Vigilance and continuing support for the solidarity campaigns with Latin America and the Caribbean is essential and no one left Congress House in any doubt that this must be the case in the coming months and years.