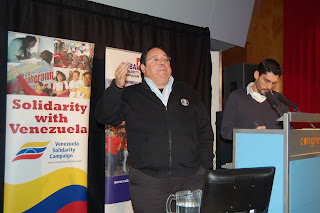 The sixth annual Latin America ‘Adelante’ conference packed out Congress Hall on Saturday 4 December, despite a snow struck morning in London. Possibly in respect of this year being the 200th centenary year of many Latin American countries independence and that in 1810 Simon Bolivar travelled to London to enlist support from the British for the revolution that had finally begun in South America or because as Walter Sandino said “the continent is now changing as my grandfather dreamed”, more than 400 people heard speakers and workshops go into detail about the “other world that is possible” and happening today in Latin America.

Welcomed by SERTUC Regional Secretary Megan Dobney, George Galloway set the scene by remembering the ‘other’ 9/11 when the US sponsored coup d’etat “drowned in blood the socialist experiment of Allende in Chile”, yet the continent has now seen the great internationalist sacrifices and social achievements of the Cubans inspire people across the whole continent. Joking about being on Fox news and constantly hearing Chavez referred to as a dictator he pointed out to applause that he is the most democratically elected politician on earth.

Jean Lambert Green MEP, talked about the positive and inspirational role the peoples movements from Latin America are having, as we try to rebalance the world and restore harmony with nature and human beings, for all our futures sake.

Christine Blower General Secretary of the National Union of Teachers said “Yes to social progress and no to US intervention”. She praised the commitment to education she had witnessed on a recent trip to Cuba and especially the fact that it did not promote consumerism and contempt for others. By investing in education and seeing it as an inviolable human right she described some of the success and achievements in Cuba and Venezuela. Contrasting them with Colombia she reminded us all of the dangers of being a Trade unionist and teacher in that country.

Seumus Milne, Guardian journalist, contrasted the situation twenty years ago – with the end of the Soviet Union, heralded triumph of capitalism and the death of socialism, a unipolar world – with today. The US is embroiled in a failed war on terror, the rise of China goes on, the 2008 financial crisis is not over and the progressive tide sweeping Latin America is offering a real alternative. It is no surprise that Latin America, which was the first to experience the neo-liberal economic shock doctrine, is the continent now challenging that economic orthodoxy, challenging racism and promoting indigenous peoples rights. It is not a settled outcome though and it will be resisted by a US committed to “roll back”. As Wiki Leaks has proved, the coup in Honduras was clearly a coup although it was denied by the US. Therefore the need for solidarity and support for the demand that the media report fairly on Latin America has never been more important said Seumus.

Workshops took place on climate change and global negotiations, the US militarisation of Latin America, Cuba’s economic development and labour relations, the struggle to develop national identity and culture, Media representation of Latin America, ALBA and economic development, Haiti, the earthquake and beyond and Venezuela – empowering the people and social inclusion. The impressive array of speakers, the level of detail and debate in each workshop meant that all delegates wanted to be in more than one room at a time!

At the next plenary, Latin Americans took centre stage with Samuel Moncada, the Venezuela Ambassador telling us how the current environmental emergency in his country brought about by extreme rain was only averted from real disaster by state “organisation, preparation and the will to act”. He contrasted this climate catastrophe affecting his country with Wikileaks revelations on how powerful countries are spending all their time trying to stop countries from helping themselves or their people.“The social policy of the US is to destroy our social policy” – for example “to encourage Cuban doctors to defect to Miami instead of letting them help poor people who need them” he explained. Through their slanders, smears and spinning information they “obviously see us as dangerous but Venezuela’s social policy, to help the poor who are being cheated by the banks and the rich is an integral part of our world view.” Proclaiming that Venezuela will not “shut up” he predicted further problems for Obama who no longer controls a Foreign Affairs committee now dominated by the right wing in Congress.

At her first appearance in front of a large European audience new Cuban Ambassador Esther Armenteros told us the blockade is stronger than ever against Cuba despite all the hopes people had for the Obama administration. Recalling her personal horrors at the effects of a blockade that denies small children eye cancer treatment she asked why “does someone up there say we are the enemy: what kind of enemy can a child be with cancer?”

She reiterated that Cuban socialism is an equality of opportunity and human rights for all and that each will receive according to what they offer to society. The pressures Cuba now faces will mean the success of this battle will sustain the socialist model into the future.

Reminding us of the solidarity shown by Barbados, Guyana, Trinidad and Tobago on the 8th December 1972 by re-establishing full relations with Cuba she expressed gratitude for them for ending the isolation and promised Cuba would always stand up for social justice and solidarity not only in the Caribbean, Latin America but also the world.

Guisell Morales-Echaverry, the Nicaraguan Ambassador, praised the voice of unity and respect that was Sandino and proclaimed ALBA as his legacy, embodying solidarity and mutual respect. It has given us an opportunity to develop economic independence and improve social conditions, not only in Nicaragua but throughout all the countries involved.

Fidel Narvarez described how the agenda for Ecuador was the long standing one “of all indigenous peoples”. The “recovery of sovereignty, by shaping our own destiny” along with the control of natural resources aligned with the “pursuit of social justice, redistribution of wealth to benefit the most vulnerable and a decrease in the gap between the rich and the poor” are all interlinked he said. Describing his countries efforts and achievements he highlighted how social investment is now higher than debt repayments and has increased every year for the last four years. “What we are witnessing is more than a few South American countries challenging imperialism” he said “We are at the forefront of the implementation of post neo-liberal economies”. “This is not a time of changes but a change of time” he said as he predicted even greater things to come for a continent striving to achieve one great Bolivarian nation.

Former London Mayor, Ken Livingstone, praised London’s Latin America community for its diversity and culture which he said enriches all of us, but lamented why so many were forced to flee their countries either as result of coups or poverty. Commenting on Wikileaks he deplored the accounts of our politicians sucking up, obsequiously to their American counterparts who are responsible for so many of the problems in the world. Praising the role of Cuba and others as an inspiration he warned of the dangers of the US backlash. He stressed the significance of China as a country that invests 46% each year in internal infrastructure projects and he urged Latin America to do likewise.

Referencing ‘The Spirit level’ and the need to share wealth and reduce inequality he stressed that only Cuba stands out in the book as having the best indices for the life of its citizens. Imagining what Cuba would have done without the effects of the blockade waged against it since 1962, he re-iterated his pledge to hopefully celebrate Cuban achievements as part of his term of office when he is, hopefully re-elected as Mayor in 2012.

More workshops on the Cuban Blockade, Mexico and the USA, Colombia and its political prisoners, Ecuador and Honduras and the coup attempts, Venezuela, Nicaragua and the life of Augusto Cesar Sandino, Bolivia and the Morales Government and a film screening of Quien dijo Miedo (We are not afraid) inside the coup in Honduras completed the afternoon sessions.

The final Plenary heard from Hugh Lanning, Deputy General Secretary of the PCS who posed the question as to how Ireland, Greece, the UK and others would fare in the current economic climate if we were in ALBA. Reminding us in the words of Jose Marti that they will “inflame us, subvert us and suffocate us” Hugh urged us all to remain vigilant and our solidarity strong because “we want them to win so we can too”.

Steve Hart, London Regional Secretary from Unite also reminded us of the threats from the US. As the UK Secretary of the Chile Solidarity Campaign during the 1970s, after the coup, he described the horrors of what happened because we need to “remind ourselves of the raw face of capitalism”. The recent coup attempts in Latin America could easily happen again or terrorist attacks could be stepped up and sanctioned again by the US. Referring to his union’s work on behalf of the Miami Five and Unite General Secretary Tony Woodley’s recent visit to Gerardo Hernandez, he urged everyone to never forget these brave Cuban heroes imprisoned in US jails for fighting against terrorism.

Jeremy Corbyn MP referred to the situation in Haiti and the cycle of debt and poverty it has been forced into for nearly 200 years for having the audacity of overthrowing slavery and becoming independent. That mentality, as typified by the Monroe Doctrine, remains to this day part of the US mindset.

In posing the question as to why someone like Evo Morales was elected he said it was “not because he was an indigenous Indian or didn’t speak Spanish”, but because he fought against “structural adjustment programmes, water privatisation and for reducing the gap between the rich and the poor”. Praising ALBA, he said Cuba’s involvement was key to countries trying to close the economic gap by prioritising health and education. A political economy based on the social needs of people and the elimination of poverty is what ALBA is about and why it is so important. He also reminded us that what is going on will inevitably attract the attention of the US for the simple reason that the continents natural resources are so vast.

Calling on us to put aside the idea that only left progress can come out of European thinking he urged us all to learn from the fantastic and inspirational social movements coming out of Latin America.

With fist aloft and crying out “Viva Sandino” Walter, grandson of Nicaraguan revolutionary leader Augusto Sandino, described all of delegates as descendants of those Latin American leaders who like his grandfather fought and inspired others. Power is changing from the hands of a small rich elite to new leaders who are supported by trade unions, women, indigenous people and all those who believe in the fact that “another world is possible”. It was a fitting and passionate note on which to end a truly inspirational, informative and well organised conference.

Celebrations continued into the night at Bolivar Hall, where the Fiesta Latina enabled conference participants to enjoy the continents vibrant and varied culture with live music and dancing. Rum cocktails and Latin American food were served, and performances from Cuban, Venezuelan and Colombian performers were weaved together with the latest Latin dance tracks from Movimientos DJs.

The evening opened with an acoustic set of Latin American folk songs from Silvia Fox followed by a virtuoso performance form Cuban jazz and classical violinist Omar Puente and guest guitarist, including a rousing finale and encore with audience participation to Che Comandante and Guantanamera. Headlining the night were five piece Cumbé, whose Afro-Colombian sounds got the audience up on their feet, completing 12 hours of discussion, seminars, speakers, films, food, dance, and live music which brought Latin America and the Caribbean to snowbound central London.